The Republic of Sierra Leone, is a country in West Africa. It is bordered by Guinea in the north-east, Liberia in the south-east, and the Atlantic Ocean in the south-west. Sierra Leone has a tropical climate, with a diverse environment ranging from savannah to rainforests. Sierra Leone has a total area of 71, 740 km2 (27,699 square miles) and an estimated population of 6 million (2011 United Nations estimate). Freetown the capital, is the largest city, and the country’s economic and political centre. Bo is the second largest city and second major economic center in the country. The country has four geographical regions, namely: the Northern Province, Eastern Province, Southern Province and the Western Area, which are further divided into fourteen districts.
About sixteen ethnic groups inhabit Sierra Leone, each with their own language and custom. The two largest and most influential are the Temne and the Mende people. The Temne are predominantly found in the north of the country, while the Mende are predominant in the south-east. Although English is the official language spoken at schools and government administration, the Krio language is the most widely spoken language in the country and unites all the different ethnic groups in the country, especially in their trade and social interaction with each other.
Sierra Leone is a predominantly Muslim country, but with an influential Christian minority. Sierra Leone is regarded as one of the most religiously tolerant nations in the world. Muslims and Christians collaborate and interact with each other peacefully. Religious violence is very rare in the country.
Sierra Leone has relied on mining, especially diamonds, for its economic base. It is also among the largest producers of titanium and bauxite, a major producer of gold, and has one of the world’s largest deposits of rutile. Sierra Leone is home to the third-largest natural harbour in the world. Despite exploitation of this natural wealth, 70% of its people live in poverty.
The recent 2014 Ebola outbreak threatens to lead the country into a humanitarian crisis situation and a negative spiral of weaker economic growth. However, with the combined efforts of the government and partners the country will soon return to its recent economic growth path.

The name Sierra Leone was adapted from the Portuguese name for the country: Serra Leoa, who landed there in 1462. During the 1700s, Sierra Leone was an important centre of the transatlantic slave trade. Freed slaves founded the capital Freetown in 1791.

Sierra Leone became a British Crown Colony, which it remained until 1961. From 1991 to 2002 the country suffered greatly under a devastating rebel war.

Before the outbreak of war, corruption and mismanagement in the diamond sector was one of the main reasons why Sierra Leone became, according to UN figures, the poorest country in the world. With the breakdown of state structures and the effective suppression of civilian opposition through the one-party government, wide corridors were opened for trafficking of arms, ammunition and drugs, all of which eroded national/regional security and facilitated crime within the country and between Sierra Leone and Liberia and even Guinea.

Besides these internal tensions, the brutal civil war going on in neighbouring Liberia played an important role for the actual outbreak of fighting. Charles Taylor, a former president of Liberia sponsored the Revolutionary United Front (RUF) as a means of destabilising Sierra Leone. The RUF terrorised the entire country in order to overthrow the democratically elected president in 1997, ultimately they gained control of the diamond mines around Kono.

After 10 months, the junta was driven away by ECOMOG-troops and the president was reintroduced. In July 1999, a peace accord was signed by President Ahmad Tejan Kabbah and the RUF-leader Foday Sankoh, followed by the biggest ever peacekeeping mission of UN-forces in the 1990s.

However, until 2002, when the war was officially declared to be over, the RUF continued to terrorise the people, and to destroy the economic and social infrastructure. The war left tens of thousands of people dead or, mutilated and over 2 million displaced. In the same year Ahmad Tejan Kabbah won a landslide victory in elections. His Sierra Leone People’s Party secured a majority in parliament. The last UN peacekeepers withdrew in December 2005, leaving full responsibility of security with domestic forces.

In August 2007 Ernest Bai Koroma won the presidency and his All People’s Congress, formerly in opposition, won a majority in parliament. 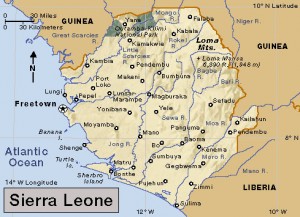 Major languages: English, Krio and a range of tribal languages